What We Lose in the Rubble

When it comes to matters of politics and policy, we tend to err on the side of nonpartisan. People are different and, as a result, everyone loves/needs/prioritizes differently. We think that’s a beautiful thing. That said, we feel there’s something looming on the horizon of this city that we can’t stay tight-lipped about any longer.

That’s it. That’s the punchline—it’s the horizon.

If you’ve spent any amount of time near SLC’s epicenter in the last three years, you’ve likely noticed the new face of 400 South. Much of the city-splitting stretch of road—once dotted with restaurants, storefronts, parking lots, and coffee shops—has been colonized by the visual equivalent of white noise. Elevator music. The Kid’s Bop version of your favorite song. The signage erected on each of the multi-tiered platitudes reads like a Mad Libs, each of their names composed from the same grab-bag of buzzwords. In the immortal words of Ben Gibbard, “They’re all different names for the same thing”.

Folks have been razing the old to make way for the new for decades in this town (see: the Ghost of Sugar House Past), but if this multi-unit development has felt a bit more frenzied to you as of late, you’re not alone. The issue is by no means confined to Salt Lake—in fact, these apartments have been popping up for the last few years in cities all across the U.S. (Denver, Seattle, and Charlotte have all seen their fair share). Some have dubbed the architectural style “fast casual;” some call it “developer chic.” Whatever you call it, a simple Google search will yield a collection of photos that look as likely to be taken in SLC as they do Minneapolis as they do Kansas City.

Don’t get us wrong: this isn’t a rally against new construction. Destruction is vital to creation in all ecosystems, and “new development” is, by its very definition, progress. The act of tearing down an existing structure to make way for a new one is not, in itself, a reprehensible crime. Sometimes those long-since neglected and infected with mold, meth, or other building-killers are simply past the point of salvation. Sometimes it’s unavoidable and sometimes it’s for the best. If we’re being honest, no, the death of Papa John’s on the corner of 400 S. and 400 E. probably wasn’t a significant loss to the fabric of our community. So why, when the day came that we found the lot had been swept of all vestiges of its former inhabitant, did we mourn our Papa who art in heaven? Because we knew that the innocuous pizza shop, like so many recently-demolished structures in this town, would be replaced with one of a handful of variations on the exact. Same. Apartment. Complex.

These multi-unit housing developments look clean, modern…“hip,” even. If you’ve wondered why they all look so very similar (from the 5-7 stories over a mixed-use ground floor to the varied colors and materials used on their facades), it’s because they’re abiding by a very strict equation of cost + permits + profit. As with any development, there are requirements and regulations that must be met in order for these structures to adhere to city standards, and it seems that when one mega-complex developer hit the sweet spot, a few dozen more decided to follow suit with a blueprint they knew would work…because it already had worked.

We’re not here to discuss any potential ethical dubiousness of these structures, we’re simply here to discuss an architectural footprint that, while seemingly a small deal, actually becomes a big deal when you place 15 of them all but side-by-side. One particular aspect that’s not working in their favor: the “mixed-use ground floors,” that, while often zoned to permit retail (something that would engage with and act as a more cohesive addition to the community) is often utilized instead as a leasing office or gym for tenants. A 2018 BuildingSaltLake.com article stated that “since 2015, the 400 South Corridor between 900 East and 300 East will have added 830 new residential units,” adding that there are an “additional 507 units expected to be under construction in 2019.” And, while we’ll give credit where credit is due—it was a pretty resourceful move to base such an influx in rental units around SLC’s functioning transit line—that’s a pretty big impact on our little city.

That impact is exacerbated by their sheer numbers; any voice of a single mid-rise on its own is amplified by the clone army in which it now stands. Whether we like it or not, these new builds are multiplying, and with each new addition their collective voice is magnified. In number alone these buildings stand to rewrite our city’s decades-long narrative within the span of a few years of economic growth. And when the dust of prosperity settles, what will be left will very much be a sign of the times, with finishes that are trend-driven and materials that were selected with affordability, not durability, in mind. And, similar to the consumer dilemma of “fast fashion,” the end product ceases to be cost-effective when it fails to withstand years of wear and tear as well as changing trends. It begs the question:

if a structure isn’t going to be worth fighting for in 20 years, is it worth building now?

Being in the real estate game ourselves, we know that the housing shortage is real, particularly that of the affordable variety. Folks are clamoring for a piece of the city, and developers are trying to meet the demand in a quick and cost-effective manner (though many of these apartments actually charge well above the average affordable monthly apartment cost in Salt Lake). We know that there are exceptions to this seemingly new norm, and that there are also plenty who dig the new builds, too.

Aesthetics are like opinions: everyone’s got one, and there’s rarely, if ever, a “right” answer, so we’ll put our thoughts on the physical appearance of these places aside (in fact, we’d like to steer very clear of veering into “aesthetic moralism” altogether). We’ll simply say this: when uniformity takes the place of creativity, a city’s magic is lost. We’d implore those who can to commission more one-offs. More structures designed by architects rather than AutoCAD. Real estate licenses aside, we’re a group of people that are truly passionate about architecture and the face of this city (a few of us are even part of groups like SL Modern, Preservation Utah, the Dean's Council for the School of Architecture and Planning, and the SLC Historic Landmarks Commission), and we want more of what makes this city unique and cool and weird and sometimes ugly. In the words of our own Paul Svendsen, “There are lots of Keating buildings out there. We could do with a few more Roarks.”

We know it’s a complicated subject, and one we certainly don’t claim to have the answer for here. We’d simply like to see a little more effort in the conversation (one humble suggestion: grants or an expedited permit processing program for builders that are seeking to make an architectural contribution to our skyline). Architecturally noteworthy structures are being built with sustainability, efficiency, and affordability in mind all over the world--we think it’s high time we started doing the same right here.

Diversity is one of this city’s (and state’s and nation’s) most lovely qualities: it inspires us and keeps us from existing in a vacuum. It helps us all to grow and connect with each other. Politics and policies aside, we’d like to challenge those mapping SLC’s future to be a little more conscious about the lasting legacy (or lack thereof) the things they create will carry, and to be a little more thoughtful about all that’s lost in the rubble. 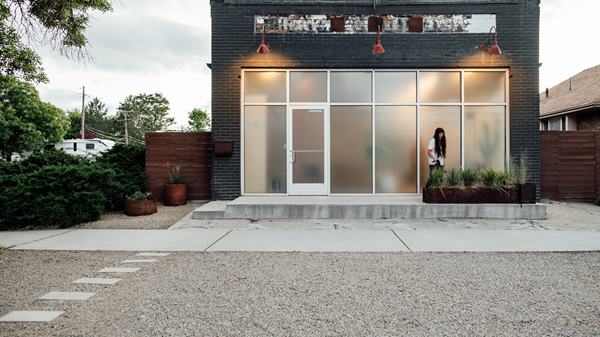