While humanity has temporarily adopted an "eat/sleep/live/work from home" routine, we're certainly doing what we can to stay busy while staying inside. But no matter how long we're asked to stay in our own spaces, we'll still spend at least a few hours a day dreaming of those belonging to others. Sometimes comfort (or distraction, or inspiration) is found in homes other than those in which we currently reside, and—whether they be the work of famous architects or a rush-job completed on a sound stage—we're always game for some movie-based #housegoals conversation. While we're all so very inside these days, we feel there's no better time than now to brush up on your favorite films, or those you missed, that feature fantastic homes (and we'd love to hear your favorites, too)!

Without further ado, here are a few of our favorite "home movies." Watch up. Stay inspired.

EX MACHINA, 2014 While the message of this 2015 film was one of technological melancholy, the space where the story unfolded is one from which architectural dreams are spun. The stunning modern home—which, in the film, is located in a remote territory of Alaska—is actually comprised of two structures: a private summer house (which holds the awe-inspiring living room's wall of windows molded around a boulder) and the Juvet Landscape Hotel (used for the wood-and-glass box exterior, open kitchen, and wall of windows overlooking the private deck and river). The structures—both designed by Jensen & Skodvin architects and located in Valldal, Norway—perfectly mirror the narrative dance between that which is organic and that which is designed. (Streaming on Netflix!)

PRACTICAL MAGIC, 1998 With a white picket fence, widow's walk, gingerbread trim, and rose garden overlooking the water, there are few things more lovely than the daydream-inducing Victorian inhabited by Sandy Bullock and Nicole Kidman’s smalltown, witchy sisters (and the prospect of Midnight Margaritas in that kitchen is almost too charming to bear). Alas, the home was solely an exterior shell constructed for filming, and the site was scraped post-wrap. That doesn’t stop us from planning what herbs we’re putting in our exact replica of that conservatory, though...

THE BIG LEBOWSKI, 1998 Los Angeles’s famed Sheats-Goldstein residence is no stranger to the silver screen. The modern home, designed by luminary architect John Lautner, has had a few spots in film and television (notably in the 2003 sequel to the Charlie’s Angels remake), but its most memorable cameo is arguably as king-of-smut Jackie Treehorn’s swinging Malibu mans in the trippy 1998 flick. (Let us know if you can think of anything cooler than Jeff Bridges kicking back in pajama pants in a space this stunning.)

THE BIG CHILL, 1983 After the film’s incredible Motown-forward soundtrack, the best supporting character of this nostalgia-infused 1983 film is arguably the Beaufort, South Carolina home in which it was all filmed (okay, maybe tied for second with a young Jeff Goldblum). The antebellum-style mansion is swoon-worthy for a few reasons: the facade is shrouded by mature, mossy oak trees, and both upper and lower decks wrap around to majestic views of the neighboring Beaufort River. Give us an Adirondack, an afghan, and an Old Fashioned—we could be here a while…

FERRIS BUELLER'S DAY OFF, 1986 This ‘80s staple moves pretty fast. If you don’t pause to get a good look at the famed Ben Rose House...you might miss it. Yes, the screen time afforded to Cameron Frye’s modern home is more limited than we’d like (just a quick peek in the living room—that’s all we ask), but the stunning glass box perched over a gully in Highland Park, IL is very real. (Streaming on Netflix!)

NIGHTS IN RODANTHE, 2008 A single-family beach house on the Outer Banks of North Carolina starred as the inn that brings Richard Gere and Diane Lane together in this 2008 Kleenex fest. (Extra cool trivia: after falling into disrepair post-wrap, the home was purchased by fans of the film, moved—intact, on a truck—to higher, more-stable ground, and turned into a real-life replica of the Inn at Rodanthe).

BLADE RUNNER, 1982 Surprisingly, the scenes that take place in Deckard’s dingy, dystopian apartment were actually filmed in one of Frank Lloyd Wright’s most lauded projects, the Ennis House. Influenced heavily by its commissioner's love of Mayan art and architecture, the home is far more palatial and inspiring than the version presented in Ridley Scott’s on-screen world. We still suggest throwing on the sci-fi film (it’s a cult classic for a reason), but afterward, hop on Google for a better look at this stunning home. (Streaming on Netflix!)

THE LAST BLACK MAN IN SAN FRANCISCO, 2019 The ending of this award-winning picture is as complex and bittersweet as it is beautiful, and the Victorian in which the tale unfolds is simply, irresistibly charming (with a "witch hat" like that, we really don't care who built it, after all). The historic home—while actually located in SF’s Mission District rather than the film’s Fillmore District—is perfectly real...and has a pretty interesting history on its own.

PARASITE, 2019 It's one of the most jaw-droppingly good movies in recent memory, yet incredible writing, masterful manipulation of metaphor, great acting, and one truly bonkers twist should not distract from the fact that the Park family’s house is one we’d gladly hole up in any day. Built for the 2020 "Best Picture"-winning movie, the home is oasis-like. Its spaces are quiet, tranquil, minimal-but-warm, and packed with incredible custom furnishings...and the accompanying garden is equally inviting. While not an architect by trade, Lee Ha Ju’s production design borders on architectural genius.

THE PARENT TRAP, 1961 Sadly, this incredible ranch house was built solely for the original Disney film. In 1961, a shell was erected for the exterior at Disney’s “Golden Oak Ranch” in Placerita Canyon, CA, and the various interior rooms in the film only existed only on a sound stage. That said, this “reel” home is still one of our absolute flick favorites, and one we’d happily build/live in today. Something of a dream where indoor/outdoor living is concerned, the ranch house included a courtyard, covered terraces, and a balcony/walkway that connected the bedrooms, hotel style. The interior of the set was filthy with drool-worthy features, as well, including stone walls, open living spaces, and a set of stairs covered in Mexican Talavera tile.

A SINGLE MAN, 2009 Tom Ford’s directorial debut was as beautiful a movie as we’ve seen, and all the dreamy, colorful scene shifts were punctuated perfectly by one feature of the film: a stunning mid-century modern home by none other than modern architect John Lautner. Occupied by Colin Firth’s sad, handsome George Falconer, the space was something of its own character in the film—an architectural representation of the beautiful, orderly, lonely man inside. In reality, this gorgeous, minimal home in Glendale, CA—built in 1949 of redwood, glass, brick, and concrete—is surrounded by oak trees and (presumably) occupied by some very happy people. With only two bedrooms, one and a half baths, and a two-vehicle carport, we think this is something of a perfect place to call home.

THE ROYAL TENENBAUMS, 2001 The Victorian on Archer Ave that Royal Tenenbaum bought in the winter of his 35th year is indeed a real location sourced by the director, but this wouldn’t be a Wes Anderson film without a cartoonish bit of color and enough charm to border on the obnoxious (though without ever crossing the line). In reality, the home—a vacant, blank canvas at the time of filming—is located on 144th Street in Harlem.

DIAMONDS ARE FOREVER, 1971 Built in 1969, this Palm Springs home was still brand new when it was featured in Diamonds Are Forever, wherein we saw a young Sean Connery get his ass handed to him by Bambi and Thumper in the circular living space. The Elrod House—considered at the time (and perhaps still by many) to be a wildly futuristic residence—is another of modern architect John Lautner’s brilliant designs. A former apprentice of Frank Lloyd Wright’s, Lautner’s work is largely seen in California residences, many of them Atomic Age in style. Perched on a ridge overlooking the Palm Springs area, the Elrod House features an overhead concrete dome, massive natural rocks, a retractable curtain wall, and glass that opens to an indoor/outdoor pool and unparalleled views of the valley below.

MEET JOE BLACK, 1998 The fantastically romantic tale of Death (Brad Pitt at his perhaps-most-hot) falling in love with a billionaire’s daughter (Claire Forlani at her definitely-most-hot) culminates at said billionaire’s 65th birthday bash at his modest family home. The scenes at the Parrish house were shot on-location in Narragansett Bay in Rhode Island at the Aldrich Mansion. The property—which sits on 72 acres and consists of stables, a boathouse, a seminary chapel and dormitories—has been owned by the Roman Catholic Diocese of Providence since 1939...and Brad Pitt's not the only one who's *ded*.

THE LAKE HOUSE, 2006 We’re game for a Sandy/Keanu reunion any day of the week, and the architecturally mind-blowing glass house for which this 2006 romantic drama was named is as dreamy a place as any to watch it unfold. The 2,000 sq. ft. home—perched over Maple Lake in Willow Springs, IL—was built in just 10 weeks by a production crew, and even had running water and heat for the actors. Alas, the stunning space (and the maple tree in its center) was torn down after the film wrapped. 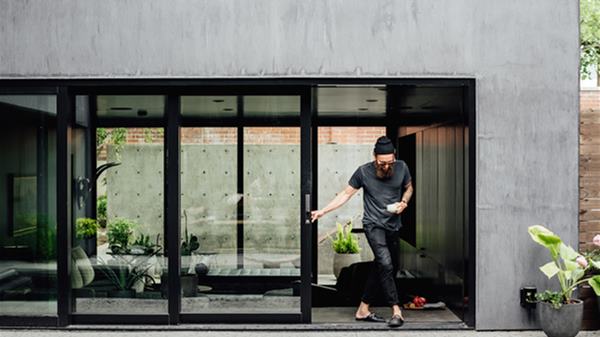 Updates + Love Notes
From the Desk of Cody Derrick | Home Appreciation
5/27/2020 | Cody Derrick
“HOME APPRECIATION.” We’ve all heard the term. But besides new plumbing and AC, what really appreciates a house? We do. And as we appreciate—as people, friends, siblings, parents—so does the value of our home...
Read More Updates + Love Notes
Gardening Tips | If You Say Sow
5/13/2020 | Katie Bald
Whether you're new to gardening, a seasoned lawn pro, or looking to try your hand at urban farming, we've acquired some helpful pointers for your future green-thumbery, care of landscape designer The Ardent Gardener...
Read More Updates + Love Notes
Use An Agent | We Can Help!
5/7/2020 | Corigan Kushma
Real estate has seen a lot of change over the years. From the way spaces are found and papers are signed, buying or selling a home looks markedly different than it used to...
Read More